An ice cream to warm your winter taste buds

With a grand top of 9 degrees in Melbourne yesterday, I sure did choose a cracker of a day to scope Melbourne for the best ice cream shops serving up winter ice cream flavours. With the idea to do this a few weeks ago now, I had marked the day in my calendar where I had a whole day free to hit the road and sample Melbourne's best ice creameries and gelati shops. Little did I know it would be the coldest July day in Melbourne in six years! Oh well, all the more reason to find some cracking winter flavours. I must say though I was a little disappointed with some of the ice creameries I visited. I know if I ran my own ice cream shop and wanted to continue the interest through the winter months then I'd be changing the flavours with the seasons and transforming a traditional summers day delight to a winter warming hot saucy sundae! A couple of shops I visited weren't even open which was a bit disappointing......so we wont even bother mentioning them! But none the less I did find some great flavours that I will share with you.

First cab off the rank was Jocks Ice Creams & Sorbets in Albert Park. Now this place has benefited from many reviews and with many award winning ice creams under its belt is considered one of Melbourne's best. But are they cutting it in the winter department? Well with their Baked Apple flavour I would have to say yes. Rich with smokey baked apples, this was one that could definitely warm those tummies. Their other winter delights included Date, with yummy smashed dates, and their Gingerbread flavour, rich with spices reminiscent of Christmas.
Check this place out at 83 Victoria Ave, Albert Park.

Next I headed to Lygon Street, the little Italy of Melbourne, where I was sure to find some heart warming gold. And I was right! But it wasn't an Italian place that I found myself at, but Helados Jauja, a little South American gem. All made fresh on the premises, their winter warming flavours included Cafe Con Leche (an Argentine coffee), Dulce de Leche (an Argentine style caramel with dark chocolate chips), and a Caramelised Pear with Walnuts (very yum!). But it was the Egg Nog flavour that stole (or should I say warmed!) my heart! Filled with spices of cinnamon, nutmeg and a touch of brandy, again I felt like it was Christmas (a white one that is!). Check it out at 254 Lygon St, Carlton. www.heladosjauja.com.au


Next I popped across the road to a franchise that I wouldn't of thought would be displaying any original winter flavours, but instead I was pleasantly surprised. Gelatissimo boasted great flavours of Apple Pie, Creme Caramel, Tiramisu, and Honey Toffee & Malt. Next week they start their 'Sweets of Italy' campaign with 8 new traditional flavours for all those traditional gelati lovers out there. You'll find them at 197 Lygon St, Carlton or other locations at www.gelatissimo.com.au


Then onto another franchise that again I thought wouldn't be setting in standards in the winter flavour department, but again I was 'warmly' surprised. At Trampoline it was great to see warm winter flavours like Caramel Pear, Salted Caramel Popcorm, and Open Sesame Caramel. But it was the hot waffles and sauces they were offering alongside their ice creams that really impressed me.....now that's a way to turn a summer treat into a winter one! Visit them at The Well, Burke Ave, Camberwell or other locations at www.trampolinegelato.com.au

Last but not least I visited a new store, again in Camberwell, Lick Me. Now there was only one flavour here the qualified at as winter one, but boy oh boy was it a good one. Cinnamon Donut anyone?! Yes please! So very good and worth the visit at 761 Riversdale Rd, Camberwell. www.icecreamdelivery.com.au

So don't be afraid to indulge yourself this winter with your summer passion, just chose warmly. 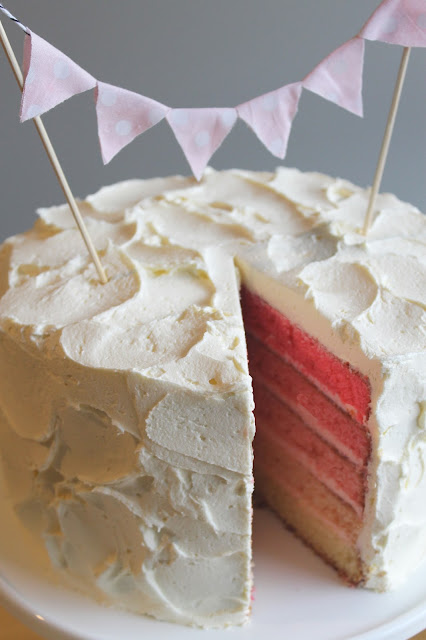 So you must be living under a rock if you haven't realised that ombre cakes are trending this year. Whether they are ombre inside or out, anything sort of cake that incorporates a colour fading from light to dark seems to be 'taking the cake' at the moment. And really they are not that difficult to master than a normal cake, the reality is there are just a couple of extra steps involved to create these very pretty little cake master pieces. We made this sweet little 'shades of pink' cake for my girlfriend for her birthday and have gladly decided to share the recipe and the steps involved. And if you are looking for some step by step pics, head over to our Instagram page (Meko Creations) and check them out. 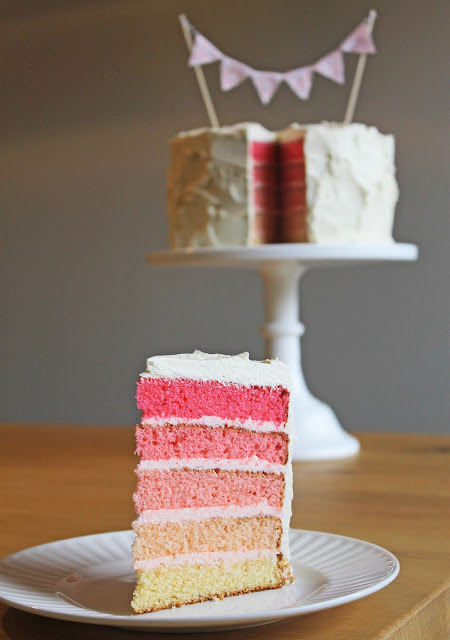 Preheat oven to 180c. Grease and line the base and sides of an 8 inch cake tin with baking paper, extending paper 5cm above sides.

Beat butter, vanilla and caster sugar in a bowl with an electric mixer until light and fluffy. Beat in eggs, one at a time.
Add half flour and fold in using a spatula. Add the other half of the flour, and again fold in. Add remaining milk and fold in.
Set out four mixing bowls and your prepared cake tin. Weigh out the mixture at 430g each evenly into each of the bowls and one in the cake tin.

Once your first cake is baked, let it cool in the tin for 5 mins before turning out on to a wire rack.
Re line tin and repeat baking as above for each of the four remaining mixes.

Once cakes are all cooled, using a serrated knife trim tops as required. Your aim is to have level cakes.

To make the butter cream, cream your butter and icing sugar in an electric mixer until light, white and fluffy. Scrape the sides of the bowl down and add your milk whilst you continue to beat.
Split the butter cream, putting 500g in another bowl to fill the cake with later and add 1/2 a drop of soft pink to it and mix through by hand.

Back at the mixer, add your white food gel to the butter cream and continue to beat until your desired whiteness is achieved. Set aside to mask your cake in later.

Starting with your bottom cake layer (neutral) spread a thin layer, approx 125g, of pink butter cream on top using a palette knife. Place the lightest pink cake layer on top and repeat until all layers are done (no butter cream required on top of the top cake layer). The aim is here to go from light to dark. Ensure your cake layers are all in line.
Refrigerate for 5-10 mins until butter cream has hardened.

Remove your cake from the fridge and using a palette knife spread a thin layer all over the cake, then return the cake to the fridge to set the butter cream. Apply the remaining butter cream to the cake, either in a smooth application or a rustic style, your choice.

Keep at room temperature until ready to cut and serve.

Tip - Use a serrated knife to cut your cake to ensure clean cuts with perfect layers inside.

So we are nearly half way through the list now as we work our way through the hottest 'sweet treat crazes of 2013' and according to the article written in the Herald Sun that lists these sweet treat crazes (read it here), cake pops are now apparently out! Do I hear a sigh of relief?? You can now happily pop those cake pop tins back in the cupboard as the whole idea of that little round ball of cake covered in chocolate and put on a stick has well and truly been done to death! I can happily say we have now moved on progressing on to other sweet treats that can be served up on a stick. And really, what can't you put on stick in to?? I've been scrawling Pinterest for different ideas, but you can try anything from mini apple pies, cookies, donuts, popcorn balls and even smores. I've included a few ideas below including marshmallows on a stick, 'hot chocolate' on a stick (love that one!....just a clever variation on the traditional rocky road - get our recipe for white rocky road pops featured below here), and I couldn't go past showcasing the little ice cream pops covered in sprinkles.....very sweet.

But it's not just 'sweets on a stick' that are taking all the glory at parties this year, popping candy is making a grand entrance too! Now for those of you that don't know what popping candy is, it's a carbonated candy that creates a fizzy reaction when it dissolves in your mouth (oodles of fun!). Basically this sugary substance can transform the boring-est of baked goods into exploding mouth fireworks! Featured below are some great ideas including ice cream cone cupcakes with popping candy, popping candy trimmed martinis, popping candy chocolate slab and even a chocolate and beetroot cake with popping candy butter cream. Primarily a garnish it really can be added to any baked goods for a wow factor. So where do you get this popping candy i hear you ask? Well this ones a tricky one, it's not always easy to buy at the supermarkets or your local food store, but some Big W and Targets do sell it. Best to try on line, but stick to sites within Australia.

﻿
So it looks as though we are definitely evolving in the party world this year......we are still 'popping' just in different and more creative ways.

Image credits and the full Pinterest board with loads more inspiration on 'sweets on a stick' and popping candy can be found here.
at 18:51 1 comment: